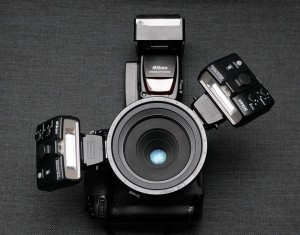 More than ten years ago, in the second half of 2005, Nikon announced the latest interpretation of a macro flash. Up until 2005 those dedicated macro flashes came in the form of a traditional ring flash.

This changed with the release of the R1 / R1C1 macro flash kit, which relies on independent remote flash heads, either attached to the front of a lens or placed freely on small base plates. This setup provides a far better flexibility than a traditional ring flash would provide.

However, this flexibility comes at a price. Looking at all the parts that you receive in the box and given the lower sales volume compared to regular flash heads, the pricing is acceptable (in 2016 500 € for the R1 and 700 € for the R1C1 kit).

So, that do you get for all that money? An awful lot of parts, nicely grouped together in a dedicated bag:

Clamp with flexible arm to attach the diffusor somewhere

What seems like a giant puzzle at first glance, becomes rather easy to handle once all the parts are unpacked. 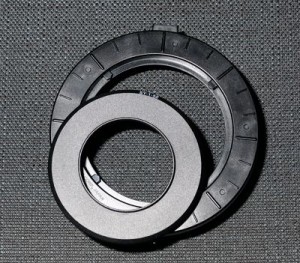 First, one of the SY filter attachment rings is screwed on to the front of the lens, followed by the flash attachment ring SX-1. The SX-1 is held in place by four springs that can be retracted by pushing two buttons on the outside of the ring. Once the buttons are released, the springs push onto the SY filter ring and fix the position by friction.

The SX-1 acts as mounting base for the SB-R200 remote flash heads. After the heads are locked to the ring by pushing a slider on the foot of the device, the position on the ring itself can be changed by pressing two small buttons at the sides of the flash foot, which release the flash head to be moved on the axis of the SX-1.

This movement is a bit hindered by the click stops, which mark the positions where a flash head can be moved to. Due to the friction the SX-1 or even the SY-X sometimes start to rotate, which is not intended in this kind of situation. Better move the heads around with two hands: One for moving the flash, one for holding the rings in place.

Having mounted the flash head(s), you now have the option to attach the provided diffusers and / or color filters. For this, first 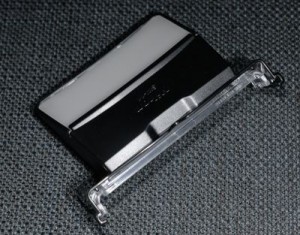 Afterwards the SB-R200 need to be equipped with a CR 123A 3 V lithium battery each and configured for operation.

As a standard two remote flash heads are supplied in the R1 kit, therefore there is not the danger of putting too much weight on the front of the lens. In the manual a list of lenses and their maximum load on the front filter is provided. For most lenses the maximum is only 2 x SB-R200. Especially lenses, that do not have an internal focus mechanism only allow 2 flash heads maximum. IF lenses without extending inner tubes usually can take 4 macro flash heads.

The SB-R200 acts within the Nikon CLS system as remote slave flash only, utilizing the Advanced Wireless Lighting. It can operate in four different channels and in three different groups. 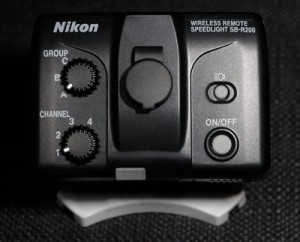 A channel is used to differentiate if multiple photographers are operating on one set. For a single person the setting can remain on channel on for both the commander and the remote flash.

Groups are used (within the same channel) to differentiate the output level between flashes or groups of flashes. Especially for a macro flash this becomes very helpful, since it is possible to form the picture with light by lowering or increasing the output level from one side to the other.

Channel and group are set on the SB-R200 via direct dials on top of the flash.

This setting has to be replicated on the commander side of the setup. Nikon offers three different commander options:

The SU-800 provides a dedicated macro mode, where it is intuitively possible to define a output level ratio between group A and B. The light can be distributed in ratios up to 8:1 or 1:8 with direct controls on the SU-800.

The same can be achieved on internal or external flashes in commander mode, but the ratio is indirectly defined by dialing in exposure compensation per channel in iTTL mode. Much higher ratios are possible this way, since the EV range for compensation is -3 to +3. A setting of group A to -3 EV and group B to +/- 0 already represents a ratio of 1:8.

The remote flashes can be either set it iTTL or manual mode (M). In manual mode the output level can be changed between 1/1 and 1/128.

The SB-200R features a guide number of only 10 (35mm / ISO 100). This clearly indicates that it is intended to be used it only in close range photography, where the offered power is sufficient. When diffusors are used, the available power is further reduced and sometimes at the border of being sufficient. A third flash is highly recommended, not only for the provision of extra power, but also for usage off camera, e.g. as background illuminator. The carrying case already provides a slot for the 3rd flash.

Due to the multiple possible positions of the remote flashes on and off the mounting ring, plus the variance in output levels, it can be very demanding to find the correct position for proper illumination. This is a good thing in itself, since it reflects the various possibilities that the flash set provides. It definitely takes time to learn different setups, which then can be intuitively replicated and adapted to different shooting situations.

Direct light of the flash heads can be a bit harsh at times. The use of the Nikon supplied diffusors does not help entirely to fix this, as their main intention is to re-direct the light for shooting at very close distances. As such, they reduce the output level too much to be useful at medium macro distances. Semi-transparent plastic diffusors available on ebay solve the issue.

Sometimes it is difficult to light up the subject properly before taking the exposure, which then makes it hard to focus properly. To help with this, the SB-R200 features a LED acting as modelling light. It is activated by pressing a button on the top of the flash head, which means that you have to push this button on each flash if you want to activate all lights.

The LED is also helpful to judge the direction of light approximately. It is automatically deactivated after a picture has been taken. When the SU-800 is used as commander, the remote flashes can also activated in a reduced stroboscobic mode to obtain a “real” modelling light.

As mentioned before, I do not find the SU-800 commander a very compelling option to wirelessly control the flash units.

For less than the price of a used SU-800, a pre-owned SB-800 flash can be obtained. Like the dedicated controller, the flash can also control three remote groups.

Major advantages of the SB-800 are:

However, there are also a few negative points to consider: 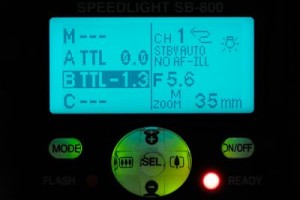 The only main advantage of the SU-800 is – besides the lower weight – the fact that no bright pre-flashes are emitted. Even if an SB-800 is disabled as a flash in commander mode (— in the display), the last pre-flashes make it into the exposure. Especially if the head is tilted directly towards the intended object.

It is possible to tilt the flash head of the SB-800 a bit, but this comes at the risk to lose the “connection” to the remote flashes, especially outdoors.

During the short-lived era of D-TTL, Nikon already tried to establish an optical, wireless trigger system within the “DX”-flash family (SB-28 DX, SB-80 DX and SB-50 DX). The SB-50 DX came with an IR filter, that could be attached to the front fresnel lens of the flash head – the SW-9IR.

This clip-on plastic filter suppresses bright light. Only a red glow can be seen through the dark plastic, which is not bright enough to be seen on the final picture.

The filter itself has two plastic “noses” on each side, which are a bit wider than the corresponding holes on the SB-800. To achieve a secure fit, both plastic noses should be cut down at the sides a bit. 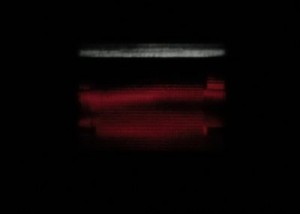 SB-800 with SW-9IR and taped down diffusor plate. The light emmittance is low enough not to influence the exposure. This picture was taken at ISO 400 and aperture of 2,8.

Nikon never officially sold the SW-9IR as a separate accessory. It was available as such briefly in the US, so it might be possible but hard to find a single filter for sale. Complete SB-50 DX can be had for around 30-50€ on ebay, but make sure that the filter is included.

To block all light emittance of the SB-800 you also have to mask the retractable diffusor plate on top of the head. It is also leaking light of the flash, but is not that influential on the final exposure. Nevertheless the pre-flashes are still a bit irritating.

To unlock the full potential of the set a third SB-R200 is highly recommended. The flash comes, if sold as standalone, with it’s own foot plate, filter holder and filter set. A SW-11 diffusor must be purchased separately.

Speaking of diffusors: The SW-11 is mainly intended to redirect the light when doing extreme closeups. It is not that useful if the light shall be diffused at normal working distances. For this, third party diffusor caps are available by JJC (ebay or Amazon). Those diffusors are directly attached to the flash and do not require the use of the filter holder.

Unfortunately there are no alternatives to the CR 123A batteries. Rechargeable batteries are available, but they differ in voltage and are known to be rather short-lived. It is better to buy the lithium batteries in bulk online, where a single one costs less than 1,50 € compared to more than 6 € in local retail stores. Lithium batteries can be stored up to 10 years without any meaningful power loss.

The kit is a bit pricey, but offers much higher flexibility compared to a traditional ring flash. Most often users make remarks about the plastic construction of the kit (only the SY-screw-on rings are metal). I have no reservations against the build quality.

It has to be kept in mind that the whole setup must be light enough in order to be supported by the lens it is mounted on. Even on a 55mm 2,8 macro lens made out of metal, the additional weight adds to a lot of friction in the focus mechanism.

Nikon had to balance build versus weight and did a good job in doing so. Also the CR 123A batteries might have been chosen due to their low weight.

The only thing which gets on my nerves is the rotation of the SX-1 ring against the SY filter ring. Sometimes, depending on the weight distribution, it rotates on his own, changing the setup of the flash heads.

Diffusors are highly recommended to minimize the sometimes harsh light. Other than that, the kit makes a lot of fun and opens new possibilities. It is a bit awkward (but not too problematic) on the mechanical side, but the provided flexibility is worth it.